Ah, summer. It feels like it’s been here for ages as we’ve had an unusually warm spring. I feared a cold dose of “June-uary” (aka days of rain as in January) so didn’t set some things in the ground as early as I could have, but that’s been okay. 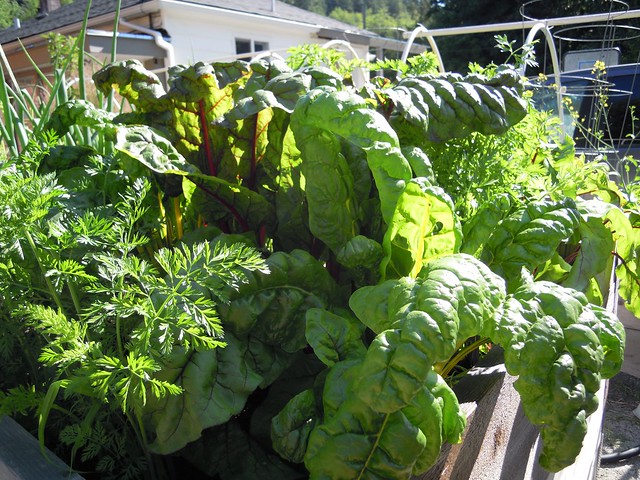 It’s so wonderful to have our garden beds full of rich soil and producing tasty rewards. We’ve been waiting for years to have room to grow like this and we’re making the most of it! In May I harvested my first ever good beets. In May! The carrots weren’t much further behind and the lettuce and chard crops have been amazing. I’ve also taken more than 12 pounds of potatoes from three plants to give the others room to grow. 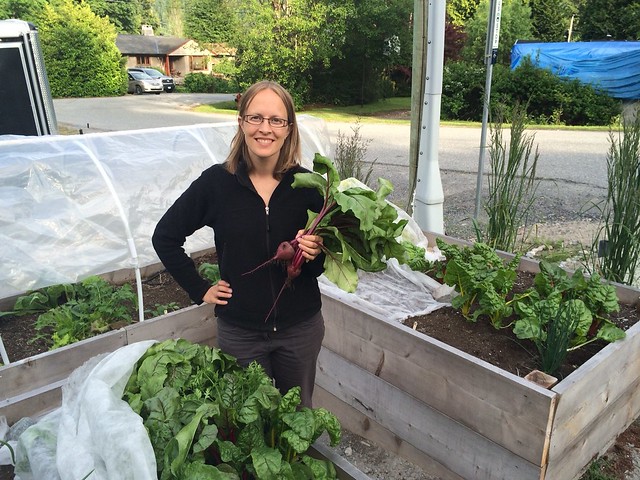 The garlic grew so quickly and so strong but then I think I forgot to water in our unusually warm spring. (I don’t recall ever watering garlic in past years) but they were showing signs of stress and it made sense… there was no moisture in the top 3″ of soil at least. In time that nasty rust took over so I cut off the scapes and ripped off every bit of rust-infested stalk I could. They were pretty sad looking for the month of June but wowsers, what a haul when I ripped them out of the ground (to make room for the leek transplants) yesterday. 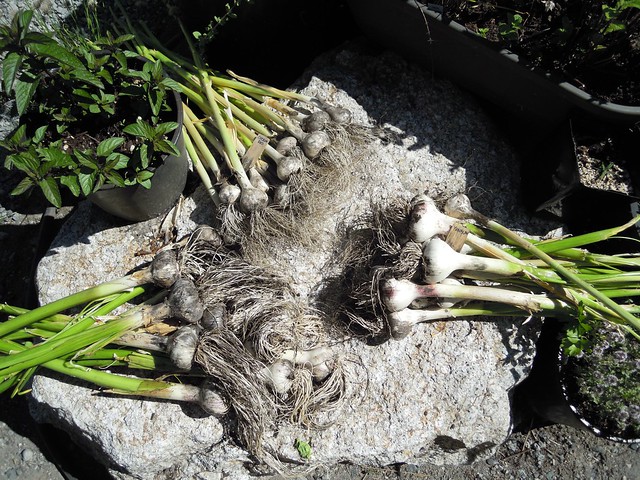 I’d never come across the dry bundle of onion sets in our garden centres before but over March break I did. Wow, they are so much easier than starting from seed and they’re prolific too! The bundle I had got split between 3 households and I got nearly 50 walla wallas. It meant there was no room for my leeks right away but we’ve been eating our onions for weeks now. 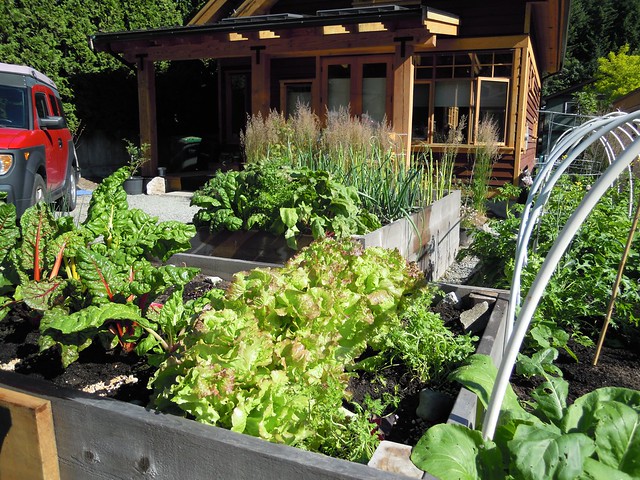 One of the first things on my list this spring was getting rid of weeds. I wish I’d taken pictures of the mess I’d made with all the flattened cardboard along the sides of our property. It was pretty ugly but I figured it was the easiest way to keep from having to weed all the time. I’d wanted to avoid a lawn completely and put wood chips down where we used to have sand and weeds but it took a while to dig out the soil and build a support to keep the chips from landing on our neighbours lawn. At that time we added some plants (including a Japanese maple that should grow to obscure the view of our kitchen from the neighbours bedroom window) and some rocks to soften the edges. It’ll be a while before things fill in but for now I’m quite happy with the result. 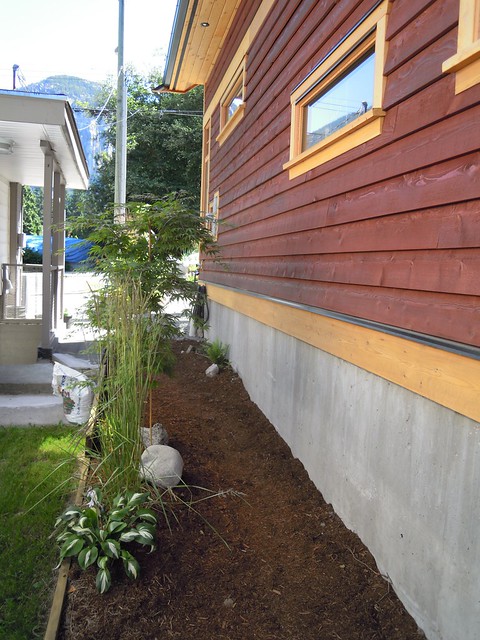 I was getting a little distressed with the lack of room for our brassicas, beans and peas and since the sale of the house next door didn’t immediately result in the construction of a carriage house or fence I convinced Kevin to build another box along the property line. I also found a spot for some blueberry bushes and an asparagus bed. I was a little late getting the asparagus started so we’ll have to see how that goes. I have some new starts in pots near the front door so I can make sure they’re healthy (since I lost a few in the main spot right away). 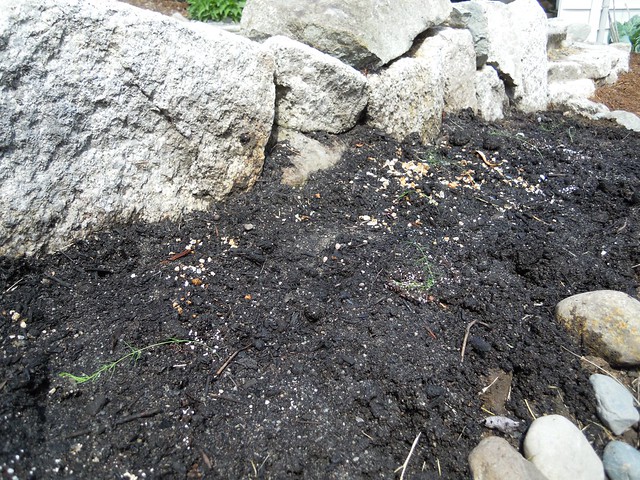 Blueberries were a bit of a surprise. It started out that I bought one as a “just because” gift for Kevin a few months ago but it turns out I like them now too so we have 4 different bushes. There are two of the itty bitty 2′ x 2′ variety, a full-sized one, and another that’s in between. Yay for growing food! We also added 3 little apple trees earlier this year too – a 4-variety espalier, a golden sentinel (the stick kind you can grow in a pot), and a mini-dwarf honey crisp. It’s been fun to make space for all these much needed sources of nourishment and to watch them grow! 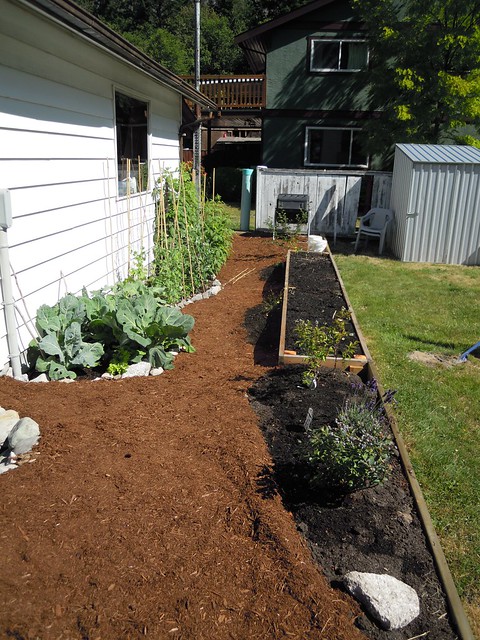 In the “landscaped” parts of our yard the yard things are coming along. The vine maples are getting bigger, the bunchberry is becoming more carpet-like and the huckleberries…. oh, those are the best! I also like that the birds come to visit our trees and the smoke bush that hangs in from the neighbours side. I get to hear them at breakfast and dinner and watch them when I’m out on the deck for lunch. Oh and those rudbeckia’s are out of control big this year. I can’t wait for them to bloom. 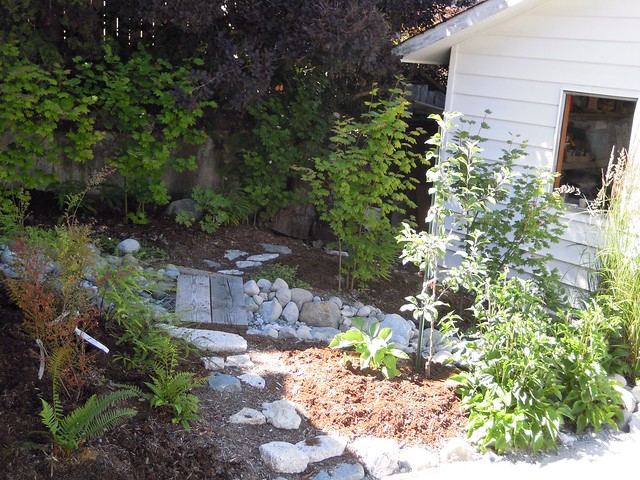 I’m beginning to see a trend… long weekends are becoming work weekends. I remember doing that a bit with our first house, but so far we’ve made them all that way in 2014. It’s a good thing too, because our house is now finally starting to look a little more finished. 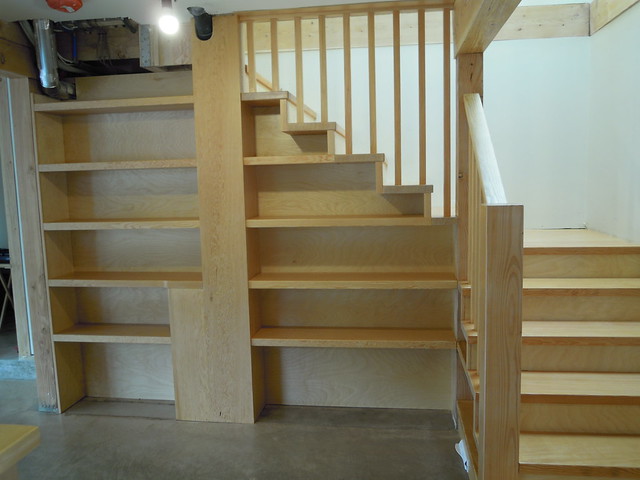 We had unseasonably warm weather last week but by the weekend it had faded into perfect weather for getting things done on the inside. After taking a carload of construction waste for recycling, we were able to pick everything up off the floors and get ready to seal them. I cleaned, re-cleaned and triple-cleaned the floors while Kevin did the rounds on all of the unsealed fir trims. Then he oiled the stairs while I sealed the concrete floor in the front of our house. It was so nice to have a three day weekend so that the floors could have an extra day to dry before the tradefolk return. 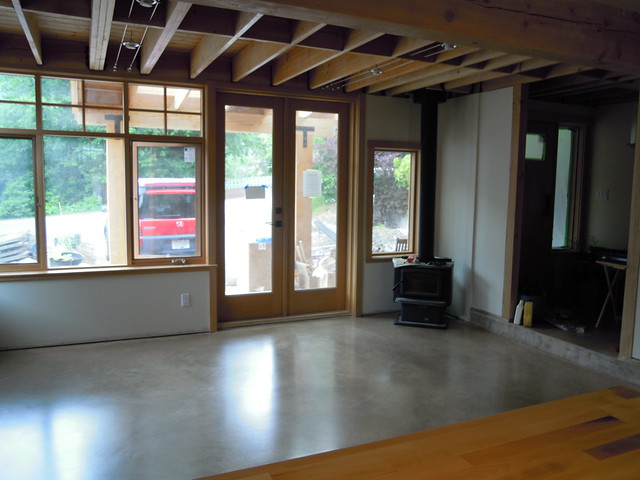 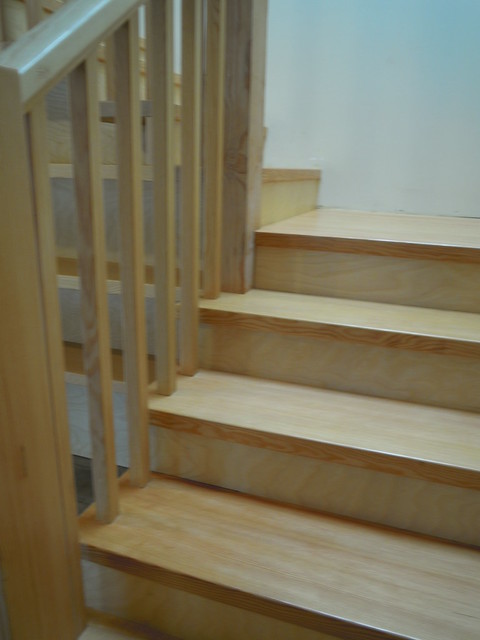 The lack of rain this weekend also made it a bit easier to work outdoors and start tweaking our landscaping plan. There are so many things about the front yard that we have to figure out so I spent some time in the back looking at the placement of our trees and the otherwise dry creek that will help manage run off during big rains. 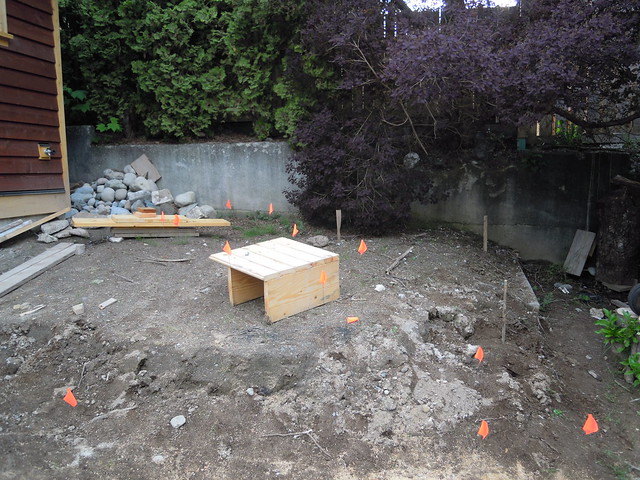 Our architect took into consideration our desire for green and a “woodland forest” kind of feel in the backyard and it’s been so nice to walk out in nature and see just what he called for in the plans. I think naturescaping is probably the best way to describe it, and given the birds, bees and butterflies we see in similarly landscaped areas, it really should be the right kind of thing for our backyard.

A lot of what we like doesn’t look so great in the winter so there are some other hardy grasses and shrubs called for too. That, and we realize we’re going to wanta bit more space devoted to food growing. 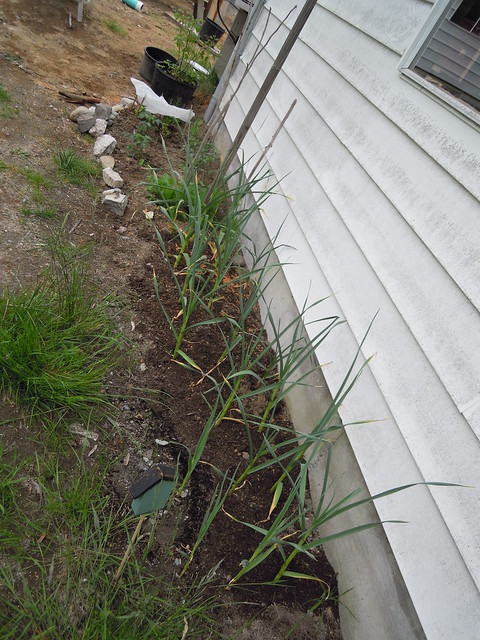 I started this little garden last year before we had access to water and it did quite well, so with my mom’s help it grew a bit this year. I took this photo and then a few hours later we were given raspberry canes from a generous nearby neighbour. I’m so looking forward to home grown food again!

Until next time, happy May!